What are the measures to reduce the springback of the pipe bender mold?

After the bending is completed, the punch and the die are separated. When the workpiece is not subjected to external force, due to the existence of elastic recovery, the curvature radius and bending angle of the curved part of the bending piece change after the bending external force is removed. What are the measures for the rebound of the mold of the small pipe bending machine?

1. Use corrected bending instead of free bending, increase bending force and heat bending.

2. For the bending parts of general materials, the pressing force can be increased or the gap between the convex and concave molds can be reduced to reduce the springback.

3. The selection of materials with large elastic modulus, small yield limit and stable mechanical properties can also reduce the springback of the bending parts.

The above is all about the measures to reduce the springback of the pipe bender mold. If there is anything you don’t know, you can communicate with our customer service, we will serve you wholeheartedly.

One tube adopts the same bending radius (ie one tube and one mold) and the same specification tube's bending radius standardization (multi-tube and one mold). This is the characteristic and general trend of current foreign catheter design and modeling. It is mechanized and automated The inevitable result of replacing manual labor is that design adapts to advanced processing technology and advanced processing technology promotes the combination of both. 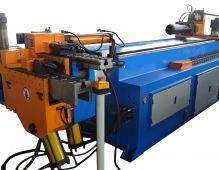