What are the operating techniques of the pipe bending machine?

What are the characteristics of the operation technology of the pipe bending machine? Do you know the customers and friends? The following will be explained by us, I hope it can help you.

1. The value of the tortuous radius: the size of the tortuous radius of the catheter determines the resistance received by the catheter during the zigzag process. Generally speaking, the diameter of the large-diameter tube is small, and the folds and slips are easily generated during the zigzag. The quality of the zigzag is difficult to guarantee. Generally, the R value of the pipe zigzag die is 23 times the pipe diameter.

2. Tubular regularization: When planning and piping, avoid excessive arcs, arbitrary curves, compound elbows and conditions greater than 180. Excessively large arcs not only make the tooling heavy, but also are constrained by the size of the bender. Arbitrary curves and compound zigzag planning are unreasonable, which greatly prevents mechanization and automatic production, making it difficult for the operator to get rid of heavy manual labor.

3. Moderate zigzag speed: The main influence of zigzag forming speed on forming quality is that the speed is too fast, the flatness of the zigzag part of the pipe is simple, no roundness is required, the pipe is broken, the speed is too slow, the pipe is simply wrinkled, compacted Block sliding, large-diameter pipes tend to form depressions in the tortuous part of the catheter. For many experiments on these two CNC pipe bending machines, it is recommended to determine the pipe bending speed to be 20%-40% of the tortuous speed of the machine.

5. Appropriate mandrel and its orientation: During the zigzag process, the mandrel mainly plays the role of supporting the inner wall of the zigzag radius of the catheter to avoid its deformation. At present, the domestically produced steel pipes are zigzag on the machine tool. If the mandrel is not used, the quality is very high Hard to guarantee. There are many types of mandrels, such as column mandrels, double, three, and four-ball mandrels, oriented single and multi-ball mandrels. In addition, the orientation of the mandrel also has a certain effect on the bending of the pipe. In theory, its tangent It should be flush with the tangent of the pipe die, but after many experiments, the demand is 1 to 2mm earlier, and the quality of the pipe is more ambitious at this time. Of course, if the lead is too large, the so-called "goose head" phenomenon will occur on the outer wall of the tortuous part.

The above is all about the characteristics of the operation technology of the CNC pipe bending machine. If there is anything else that does not understand the local can communicate with our customer service, we will serve you wholeheartedly. 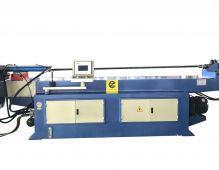